A chunk of Bitcoins seized five years back following the hacking of Bitfinex cryptocurrency exchange is now being moved. The transfer of these Bitcoins, worth more than $620 million, has put market participants on alert and has raised speculation that it is contributing to the decline in the price of Bitcoin.

Whale Alerts, which analyses blockchain of Bitcoin, issued the first signal by pointing to a flurry of more than five dozen trades from wallets that remained dormant since the hack took place in 2016.

Other trades involved the transfer of small quantities of Bitcoin, including a 1.5 Bitcoin transfer. Overall, there were 63 transactions that moved a little above 10,050 Bitcoins valued at roughly $620 million.

Even though the hacker had once in a while moved some Bitcoins between wallets, the transfers completed today easily represent the largest transactions of Bitcoins that were hacked in Bitfinex saga.

In the last few years, the hacker had transferred between 1% and 2% of the holdings and yesterday nearly 8.3% of the roughly 120,000 Bitcoins worth more than $7.40 billion were moved.

The reason for the aforesaid transactions is difficult to interpret. While some of the transfers between wallets are known to be linked with the hacker, many were newly established ones. Several analysts have opined that it is almost impossible for the hacker to liquidate the Bitcoin holdings as none of the top cryptocurrency exchanges will accept hacked Bitcoins. The hacker made an attempt to liquidate some 736 Bitcoins last year through the Russian darknet market and some of them ended in Bitfinex.

As the hacker has almost no chance to profit from the Bitcoins, some Twitter traders speculated that the transfer was carried out to simply excite the market participants and create short positions. 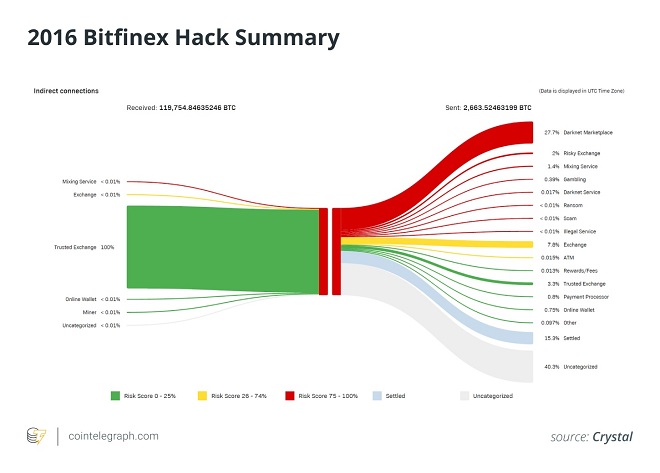 The search for the hacker continues, with Bitfinex announcing a reward of $400 million for data regarding the hacker. Back in 2019, the case got a breakthrough when two brothers in Israel were alleged to have committed the hacking, but police were able to recover only wallets with far lower than the roughly 120,000 Bitcoins swindled in the hacking incident.

No, th e Bitfinex hacker can’t sell the #Bitcoin (not in any volume).
But he/she/they can move it to try to manipulate the market while they short it elsewhere …

The movement of Bitcoins that were involved in Bitfinex hacking incident caused additional volatility in the markets. Coinbase, which got listed in Nasdaq yesterday, surged to over $425 per share before declining to close at $350 per share. The closing price was still higher than the reference price of $250 per share.