The price of Bitcoin (BTC) has broken above the $13,000 level after PayPal’s statement triggered a sharp rally which propelled the price to a fresh 2020 high.

Bitcoin, which was trading at $12,936.78 at the time of writing this article, has gained roughly 10% after the Paypal announcement and is now inching towards becoming the 21st largest asset by market cap, eclipsing PayPal.

PayPal’s cryptocurrency related announcement has been made a fortnight after Square, another payment processing behemoth, revealed its entry into Bitcoin by investing about 1% of its assets into Bitcoin.

As per Lanre Jonathan Ige, an academic at Amun AG, the ongoing trend of big ticket investments will drive institutional interest to Bitcoin. Ige stated:

“Corporations are often trend-following and we can expect a number of other corporations to follow the lead of Square and Microstrategy, as the returns of the assets continue to impress.”

Nevertheless, the latest news from PayPal will expedite the reach of Bitcoin to public, in comparison to institutions. The reason is that PayPal may lure more mainstream public by projecting the crypto as an investment asset for the time being and as a mode of payment in the months ahead, a scenario which Bitcoin community is eagerly waiting for as it will propel mass adoption.

As per data published by Glassnode, Bitcoin currently has more than 187 million users or “hodlers.” Even though the figure looks impressive, crypto analysts Willy Woo has pointed out that this fades against 487 million users of PayPal.

This is a big deal.

Estimating how many HODLers of BTC from on-chain forensics is from the incredible work of @glassnode. pic.twitter.com/QlOkZ9WRJZ

By including Bitcoin, PayPal is taking the asset to mainstream investors. Even though PayPal will initially only its clients to only buy, sell and hold Bitcoin, it should be noted that the announcement indicates that crypto payment and transfers will be made available next year. Once this happens, it could solidify Bitcoin’s standing as a payment and remittance system.

Bitcoin could easily reach the mainstream as PayPal and other centralized platforms start supporting the asset. In fact, centralized systems, in addition to sidechains and lightning network, could be utilized to avoid congestion in Bitcoin’s blockchain, paving way for large transactions that necessitate enhanced security, openness and unalterable proof of ownership.

Even though it looks as if payment processing enterprises and cryptocurrencies are looking at more concerted effort as time goes by, the same logic cannot be applied for banks and the issues they face is mirrored in stock price.

Jon Erlichman, tech correspondent at BNN Bloomberg, has pointed out that assets such as Bitcoin, Ether and stocks of payment processing firms such as PayPal and Square were performing well earlier this year, but started underperforming after the outbreak of Covid-19 pandemic.

So far, the prices of Bitcoin and Ether have rallied 80.5% and 217%. In the meantime, PayPal gained 99% and Square appreciated 186%. Banks such as JP Morgan and Bank of America, on the contrary, have declined 28% and 32%, respectively. The stock of Citigroup has lost 46%, while Wells Fargo has declined 58%. 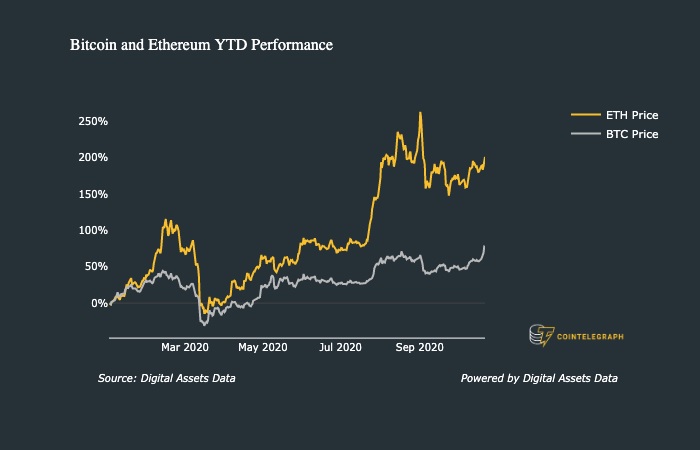 Bitcoin, which remains the best performing asset that is prevalent, has eclipsed gold and the S&P 500 by a huge margin this year. As an increasing number of people start considering Bitcoin as a store of value, it is likely that many people would soon shy away from banks and begin investing in cryptocurrency.

As per professionals, Bitcoin could even gain from what some people refer to as the ‘Robinhood effect,’ a situation where small investors with surplus funds invest in an asset through free of charge, game based investing platforms in an attempt to evade the mumbo-jumbo attached with banks.

If the aforesaid scenario becomes true, Bitcoin could witness amplified investing rage that happened when Robinhood investors channeled funds into the stock of Tesla earlier this year.