According to data provided by CoinShares, digital investment products that provide exposure to Ether (ETH) have had net inflows for the last four weeks in a row. Earlier on, ETH investment vehicles had been on a prolonged 11-week stretch of outflows that had reached a high point of $458 million year-to-date (YTD) in the middle of June.

In the most current version of CoinShares’ weekly “Digital Asset Fund Flows” report, it was stated that Ether investment vehicles received $8.1 million in inflows between July 18 and July 22, adding to the previous week’s total of $120 million.

The sum of $120 million is the highest weekly inflows for ETH assets since June 2021, and CoinShares has indicated that “investor confidence is now recovering” as Ethereum’s long-awaited Merge gets closer and closer to completion.

Outflows of funds from investment entities that hold ETH have reduced to $315 million so far this year, compared to $458 million in June. According to the information provided by CoinShares, investment products that provide coverage to Bitcoin (BTC) witnessed the biggest inflows of $19 million last week. This is an addition to the huge $206 million that was invested in BTC funds the week before.

Notably, although investment firms have been cautious with ETH for the majority of 2022, their outlook on BTC has been rather positive, save for a few hiccups, with BTC products collecting $241,3 million in inflows YTD. This is despite the fact that ETH has been trading at a premium for the majority of the year. In a research study that was shared with Cointelegraph, the Singapore-based asset management firm IDEG stated that the sentiment of crypto investors is shifting from neutral to positive, and that Ethereum’s Merge would be a crucial driver of the market rebound. This information was gleaned from an analysis of investor sentiment that was conducted. 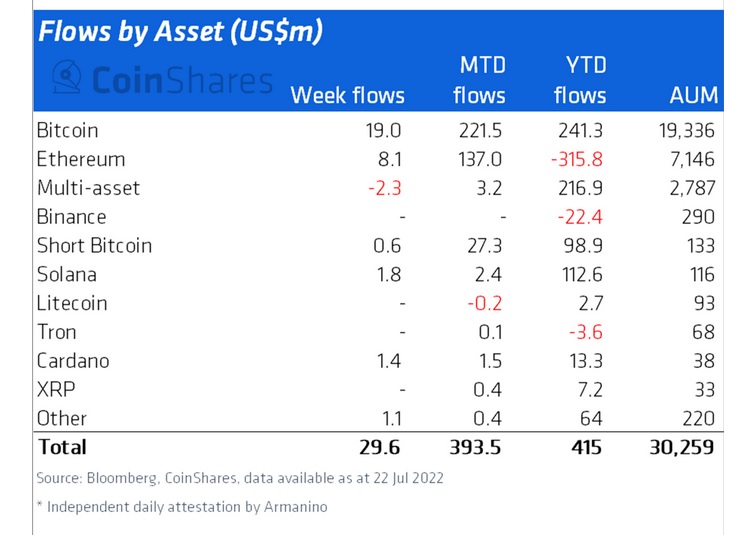 In spite of the fact that there have been some setbacks and delays in the transition from proof-of-work to proof-of-stake for Ethereum, the Merge is still expected to take place on September 22, and this gives the market with a distinct “positive upward trigger.”

*Few quick points to clarify:
-L2s, not the merge, will take care of lowering gas prices
-Merge is a change of consensus mechanism, not an expansion of network capacity
-Solutions to gas fees, speed & scalability are coming from rollups and sharding https://t.co/nCH9WQ3IAY