YouTube, which had suspended numerous cryptocurrency related content from its social media platform unilaterally, without any sort of communication to the content owner, has started reinstating the deleted contents. In this regard, YouTube has responded via a tweet to YouTuber Carl The Moon regarding the crypto related videos that were removed from the platform earlier this week.

Regarding the subject, @TeamYouTube responded to an earlier tweet sent by Carl The Moon, identified by twitter handle @themooncar).

“Hey there, this was an error on our side during the review process – your video should be reinstated and strikes resolved. Let us know if you’re seeing otherwise!”

Following the clarification provided above by YouTube administration via a tweet (@TeamYouTube), Carl The Moon shared the following information with Cointelegraph through a direct Twitter message:

“I can confirm that my warning/strike was removed, and most of the other censored YouTubers have also had their strikes removed.”

Even though, YouTube administration has acknowledged the error, many YouTuber content providers were affected during holidays as the unexpected termination of crypto content began on December 23.

Yesterday, Michelle M, a YouTuber, who owns the MamaeCryptochannel, tweeted that she is doing her best to enjoy her vacation, despite the ban. While informing followers that his videos are back online, Carl The Moon stated that he no longer trusts YouTube.

Carl The Moon questioned the credibility of YouTube. He wrote “YouTube has admitted that this was a mistake, but this has severely impacted YouTubers business. However, the biggest thing I have learnt as a Youtuber is to not trust Youtube.”

Even though crypto related content has been restored, several YouTubers have conveyed their enthusiasm to shift to blockchain-powered social media platforms to distribute their content.

LBRY, which offers a decentralized content sharing and publishing platform, now boasts of 500,000 users of which 200,000 joined last month. The temporary crypto content ban was used by LBRY to market its platform. 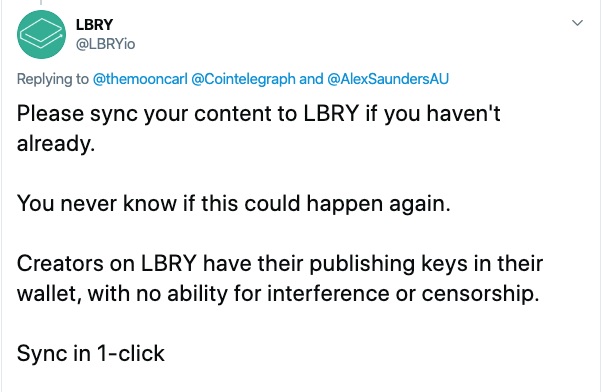 The blockchain firm sent a tweet from its official handly @LBRYio, inviting them to sync their content with the blockchain platform so that they remain lease affected in case YouTube terminates content by mistake again.

This includes a tweet from the founder and CEO of Binance Changpeng Zhao (CZ), who said “This is a good example of a short term setback, but probably good in the long term. Will let new platforms emerge with better freedom. People will create content and post them elsewhere.” 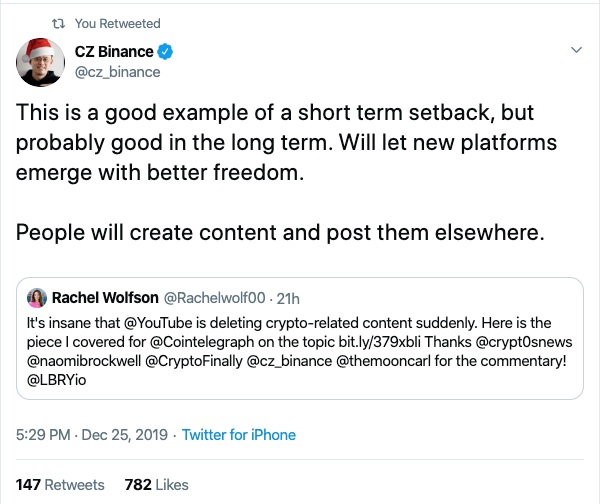 Justin Sun, Tron CEO and Founder, used the scenario to draw YouTubers to BitTorrent. Sun tweeted “Posting your content through #BTFS and @BitTorrent. It will exist on internet forever and be available anytime anywhere!” 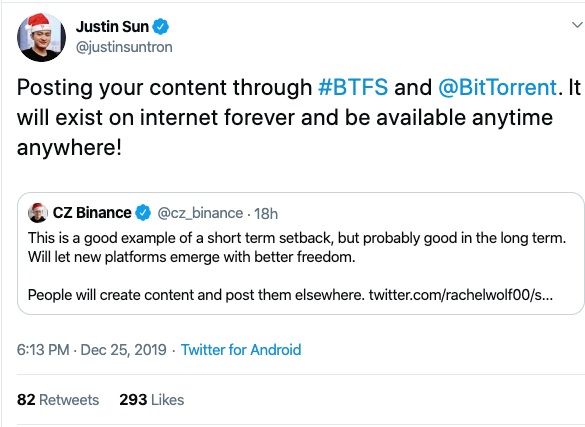