Jeffrey Wilcke, core developer and co-founder of Ethereum (ETH) blockchain, has supposedly forwarded 92,000 ETH worth roughly $11.50 million to the US headquartered cryptocurrency exchange Kraken on Christmas.

However, Jeffrey Wilcke’s tweet has given clarity regarding the bulk sale of Ether on Kraken exchange.

Wilcke, co-founder of Grid Games as per GitHub account, has revealed that he needs money to fund the development of his game. Wilcke’s tweet revealing the sales of Ether is also backed by news disclosing an ETH address, perceived to be that of Jeff Wilcke, involved in the transfer of 90,000 ETH to Kraken.

In January 2016, a developer wallet, supported by the Ethereum Foundation, transferred 408,000 ETH to an 0x600 address. Until today, the address mirrors systematic selling and movement of funds.

You are right. Nothing goes unnoticed, @jeffehh.

Given that you were awarded so much $ETH, you should use that money to help Ethereum. pic.twitter.com/OARA4etUn1

However, transactions declined on Christmas. The address still holds 218,000 ETH, worth about $27 million. Notably, 90,000 ETH was moved out of this account and sent to an intermediary ETH address before forwarding to Kraken. Etherscan, which enables monitoring movement of Ether tokens, provides evidence that the token transfer was carried out by 0x600 address. 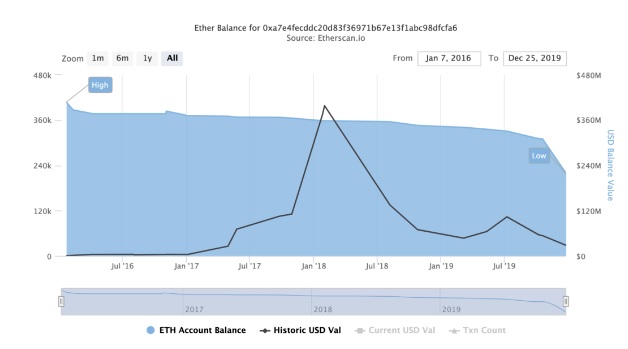 Before Wilcke forwarded 90,000 ETH to Kraken, Vitalik Buterin disclosed on a December 11 podcast that the Ethereum Foundation garnered approximately $100 million by diluting ETH near its historical high price of $1,400 in January 2018.