In its third annual report on “Blockchain in Payments,” Ripple has expressed optimism about blockchain sector, XRP digital asset and cryptocurrencies.

The report was prepared using a detailed survey carried out between August and September 2020. The 854 participants, across 22 countries, in the poll offer payment processing services.

Furthermore, Ripple disclosed that the firms which participated in the survey had revenue in the range of $500k to over $10 billion.

Ripple compares that with the 2019 survey results and points out that the blockchain sector is in the final stage of adoption.

In the prevailing conditions, with the international economy severely hit by the Covid-19 pandemic, the report claims:

“Business interest in digital assets, when paired with blockchain technology for payments, has grown sharply as early adopters look to increase the speed in payment settlements.”

In that respect, the published document points that 79% of poll participants have recorded growth by venturing into uncharted markets, while enhancing their product offerings and services. Of all industries, the most critical was advancements in payment technology, as per 44% of poll participants. The firms that took part in the poll stated that their clients anticipate them to “continue to innovate in payment technologies”.

With regards to adoption, the report identified that 34% of partakers are in the creation of some software solution using blockchain technology.

As a result, the industry has made a huge jump between “early adopters to early majority”. 24% of partakers anticipate finishing production and entering into a trial and PoC (proof-of-concept) within the upcoming two years as indicated below.

Interestingly, 37% of survey participants in emerging markets are working to implement blockchain technology. 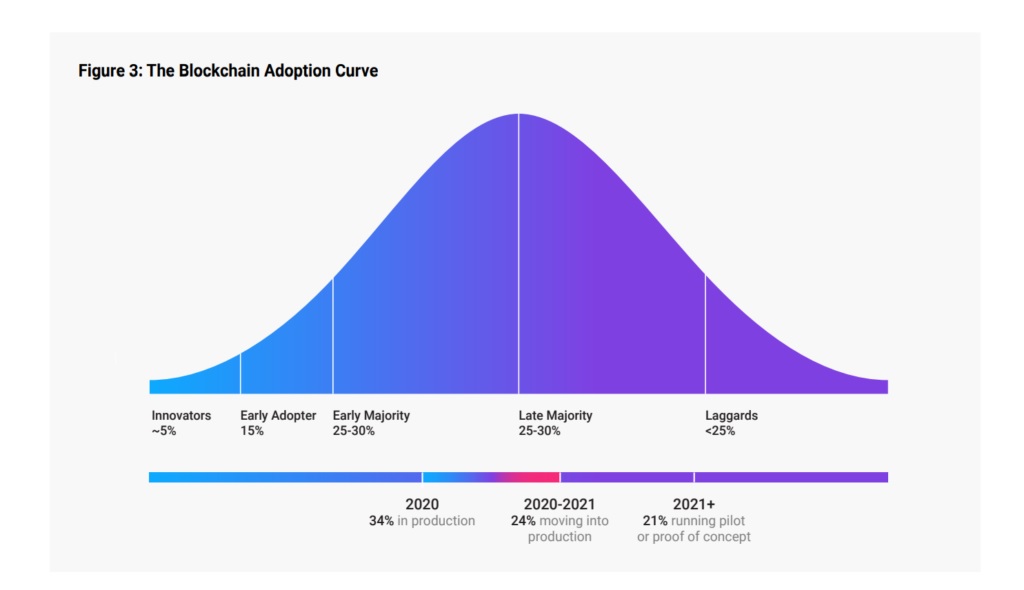 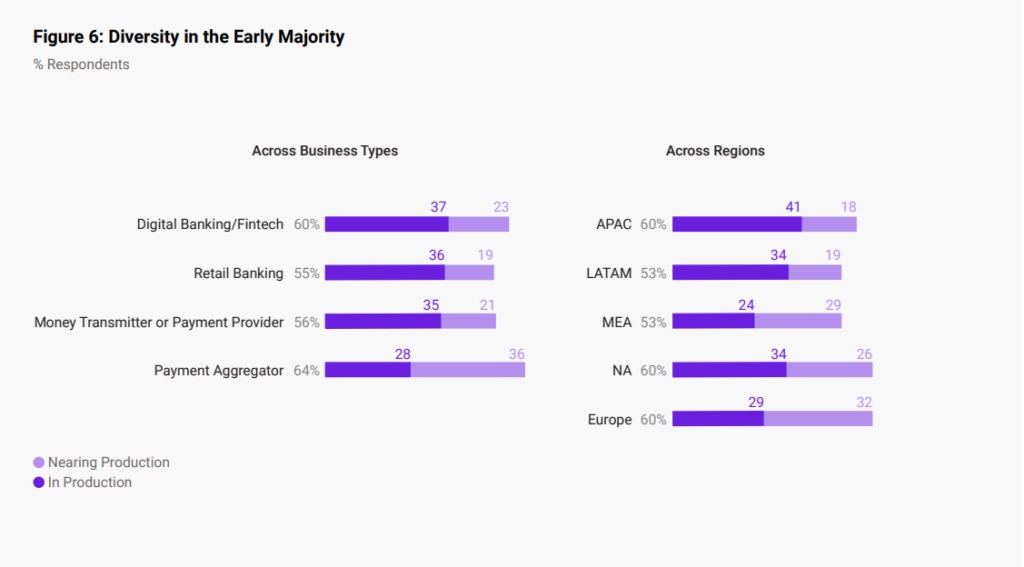 Asia and the Pacific (APAC) leads blockchain technology adoption with blockchain implementation percentage of 41%, while Latin America (LATAM) follows with a 6x increase in blockchain adoption.

The Middle East and Africa (MEA) has a share of 24% in blockchain adoption and a likely increase to 29% as illustrated by the image below.

Another important fact disclosed by the document published by Ripple is the diversification in application areas by enerprises utilizing blockchain technology.

98% of poll participants have implemented blockchain technology for supply chain administration (62%) and commerce, and finance (51%).

Therefore, it is not overwhelming that 99% of poll participants stated that their firm could utilize a digital asset such as XRP to execute payments or as a mode of exchange.

In contradiction to the 2018 poll results, the percentage has risen by 94%.

40% of poll participants underlined the speed of executing cross-border transactions as the greatest benefit of blockchain technology.

In particular, the digital asset XRP and real-time transfers with Ripple’s On-Demand Liquidity solution is considered as extremely beneficial for companies participating in the poll.

Cost and reliability has been chosen as the next two key benefits of blockchain technology, with 32% and 27% vote share.

Regarding the barriers to blockchain adoption, survey participants pointed to a dearth of regulatory certainty, quantum of investment necessary to adopt the technology and security. Nevertheless, the outcome indicates that digital assets such as XRP are progressively playing a crucial part in the advancement of blockchain sector. The report came to the following conclusion:

“Emerging markets are leading the charge, recognizing that responsible usage of blockchain and digital assets can unleash tremendous potential for their economy. Without a doubt, both will drive greater financial inclusion and economic growth not unlike the Internet’s impact. Mature markets stand to benefit as well.”